“From tiny Acorns” Albert Edward Wills would have been proud to know that his roofing tradition he began circa 1910 in Charing Heath would to be passed down through the generations to become Ashford and Cranbrook Roofing.

The family craft of Kent peg tiling is a proud heritage that will hopefully continue to be entrusted to the next generation for decades to come.

Derek Wills took the mantle from his father with pride and has passed his knowledge onto many an apprentice in his time.

He has furthered the company strengths by working for many years with Marley roof tiles on sites around the country learning the different art of new build roofing.
This enabled the family to service the ever increasing need for new housing. This breadth in knowledge was surely the outlining reason why the family tradition survived where many others have faltered.

Wayne Wills apprentice to his father from a young age took on running the family business by his fathers side once he had gained experience in the business world.

The business has roofers spread throughout the local area whom all act with the same high standards and craftsmanship passed down from Albert all those years ago.”

Wayne strives to ensure the company continues to keep up with the ever evolving construction Industry. Ashford and Cranbrook Roofing Partnership. works closely with many local esteemed and well established builders and organisations, providing a service second to none. Derek is a second generation roofer who joined the construction industry following in the footsteps of his family heritage. After years of Marley roof tile company apprenticeship he stepped out into the industry of his own right and has established himself as a prestige craftsman in Kent Peg tiling and heritage roofing.

In the local community Derek has established himself as a key business representative. Holding the post of Cranbrook Business Association Chairman for 4 years before passing over the baton to follow other interests.

Dereks legacy like Albert before him will be followed and passed on to future generations of heritage roofers. Wayne 3rd generation heritage roofer now a father of three joined his father as a heritage roofer in 1994 after many years of apprenticeship as a young man prior to going off to broaden his knowledge in business.

Wayne manages the business striving for continued depth in quality and service to clients passing on the family heritage legacy to the generations to follow.

As well as looking after our health and safety requirements he strives to maintain and uphold a commitment to standards throughout the firm.

Wayne has established himself in the community working with varius local groups and hepling out on a regular basis.

Because of this work he has also supported and worked alongside Kent County Council in managing the process for the build of a new build school project in Ashford, Kent which means working with a local school.

He continues to be the lead heritage trainer within the firm passing down the key experiences and knowledge that can only be gained from decades of working in the industry and has recently established a close working relationship with SPAB, Society for protection of ancient buildings as a regional craft Kent peg tile expert and has introduced the production of our own hand made Kent peg tiles to help maintain the supply of local craft materials for future generations.

John 3rd generation heritage roofer, father of two joined the firm after leaving school at sixteen to work as an apprentice to both Wayne and Derek.

John has gained his experience in heritage roofing as well as the need for attention to detail from his work with Wayne and Derek. 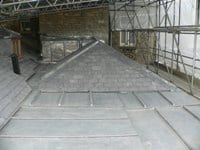 As continued profession development John has undergone Lead Sheet Association training to qualify as a lead worker and has since carried out many quality lead works over the years.

John has a wide knowledge of roof materials and is the lead roofer in all our prestige roofing projects given his commitment to quality and a high level of organisational management.

John is also the lead trainer in Western Red Cedar shingles on which he is an highly experienced fitter.

John continues to lead in the renovation of essclastical buidings throughout the South East of England ensuring the family goal to protect our heritage. Michael 3rd generation roofer, father of 3 joined Wayne and Derek as an apprentice from school to train as a heritage roofer. Michael has developed a broad skill base in many aspects of heritage roofing specialising in peg tiling.

For help in restoration and reconstruction, the Museum of American Frontier Culture — a living history operation with four authentic 18th and 19th century farms — goes straight to the source.

Whether the museum is working with stone cottages from Northern Ireland, timber-framed farm buildings from Germany, or log buildings from a farm in the Shenandoah Valley, masons, thatchers, carpenters, and restoration specialists skilled in traditional methods of building construction are employed to provide the same techniques used centuries ago by the original builders. Even the museum’s restoration work and reconstruction methods follow the practices used in the building’s country of origin as they too, differ from country to country.

The finished buildings coupled with appropriate furnishings, crops, animals, foods, and a knowledgeable staff of costumed interpreters. present a living exhibit of 18th and 19th century European and American culture. There the visitor can see the lifestyles left behind in the Old World and the new life they established in America.

This attention to detail and the museum’s work to preserve European heritage in America, have caused visiting cratftsman and tiler Derek Wills to change his mind about Americans. ‘My opinion of Americans is that they are very fast people,” said Wills, a professional tiler for more than 23 years. Although he had heard some about the project in America to preserve English, German, and Ulster heritage — with a touch of English scepticism — he had his doubts about the scope of such a project and the ability of “Americans” to get the job done right.

“I didn’t think it could be done and certainly didn’t expect something of this magnitude. It took my breath away to see what the museum has done. The American farm was everything I’d ever learned about and imagined,” said Wills. “Your English house, a typical farm, is absolutely correct.”

Wills lives in Kent, England in a small town (population 10,000) called Cranbrook. located in the southeast corner of England. As a contractor, he is known for his work with traditional tiled roofs and estimates that 90 percent of his work is on old buildings.

His long association with traditional building trades, has Wills at work on a variety of restoration projects.

One of those cooperative projects was a 500-year-old chapel being restored by an English preservation society. When the old tiled roof was stripped off to be replaced, they discovered another set of rafters which once held an earlier roof of thatch. The tiling style often tells a story.

“In the olden days they used to nail the wooden larths (laths) on with metal nails. However, the climate in England will cause these nails to rust away and the roof would need to be replaced in about a 100 years,” said Wills.

Wills estimates the Worchestershire roof’s weight to be about 6 tons.

Wills has now returned to England and enjoyed his first trip to America. “My goal is to bring my wife and kids to the museum, so they can see and appreciate what the museum is doing,” he said. “It’s nice to know that we are preserving English heritage in America for our grand-kids and their kids. I’m proud of what I’ve done and being asked to come Really, I am honored to be part of this project. They’ve done a smashing job.”

What did he like most? “I was most impressed by the friendliness of every person I met. I didn’t expect the welcome I’ve received. Although English house at the Museum of America Frontier Culture.

the weather (blizzard of ‘93) held us back a bit, we finished on schedule, thanks to the able assistance of museum staff.”

What did he miss the most? “Well of course, I miss my family, but other than that I’d say, the English pint.”